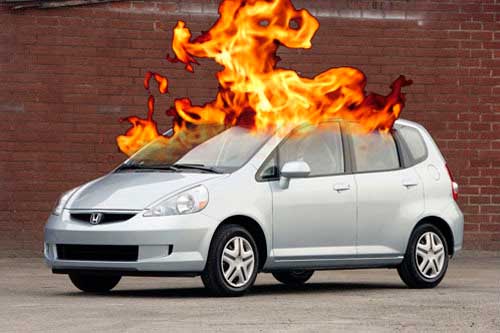 Sticky accelerators, fuel lines that can burst into flames and even a hood ornament that may impale pedestrians are just some of the reasons auto manufacturers issue safety recalls for their vehicles after they have hit the roads and headed out into traffic.

While some recalls may seem innocuous others can be a matter of life and death.

“People absolutely need to respond to the recalls and get their vehicles repaired. Too often people ignore recall notices and they are sometimes serious,” says Russ Rader, vice president of communications for the Insurance Institute for Highway Safety (IIHS).

It may easy to ignore safety recall notices for an airbag label on the back of a sun visor that does not stay affixed, but the next driver of that vehicle may not be prepared for the risk involved when an airbag deploys because the label is missing.

Other recalls may be more obviously dangerous if ignored.

“An alarmingly high percentage of safety recall notices go ignored and unrepaired,” says Rosemary Shahan, president of Consumers for Auto Reliability and Safety (CARS). That could be a mistake. Take for instance a Ford Motor Co. safety recall concerning the popular F150 truck model, among others.

The control switch for the cruise control in affected vehicles could overheat and cause a fire, even hours after the vehicle has been turned off.  Numerous house and garage fires were caused by the defect, which could have otherwise been repaired by changing a $21 switch.

“Cars catch fire. It’s actually one of the more common reasons for recalls (some component) is prone to bursting in flames,” says Shahan.

Insurance companies will continue to provide auto insurance for vehicles with a recall notice, but choosing to ignore a recall notice can be a costly mistake.

Generally insurers do not charge more to insure recalled vehicles or raise the rates due to a recall. They also do not add a surcharge on a policy when a recall goes unrepaired, but that does not mean the customer has no financial liability. Insurers can take into account whether a recall was addressed if a claim were to be filed, explains Loretta Worters, spokesperson for the Insurance Information Institute.

“Since a company has no way to consistently know when customers ignore recall notices, they don’t attempt to surcharge for this reason,” Worters says.

She compared the situation to when customers know their brake lines are wearing thin but don’t take the vehicle to the repair shop. Since insurers do not know about the situation they cannot charge for it.

“Of course, when an accident happens (because of the defective brakes) and the claim is made, a company is then able to take that into consideration for that customer’s rate going forward,” says Worters.
Safety recalls can run the gamut. Here are 10 of the more interesting, deadly and oddball recalls that have been issued in the past:

1. Toyota has been the source of myriad recalls over the years, but the recalls surrounding its accelerator problems have been grabbing headlines for much longer. Close to 5 million vehicles have been recalled so far. It is the most massive recall in the automaker’s history. What began as a recall for a floor mat that the manufacturer believed was slipping and interfering with acceleration, morphed into a recall of countless vehicles that had sudden acceleration problems. Between 2000 and 2009, NHTSA received 17 complaints involving 21 deaths. Numerous law suits are pending against the manufacturer. Toyota has also paid  close to $50 million in fines in 2009 and 2010 for failure to properly report the problems with their vehicles to the NHTSA.

2. Possible impalement may be one of the more bizarre reasons for a recall but the safety risk is real. High-end automaker Bentley has recalled about 600 of its vehicles in North America for a hood ornament that could potentially impale pedestrians in a collision. A mechanism inside the retractable namesake “flying B” hood ornament may rust from water erosion, causing the mechanism to fail to retract in a collision. The recall effects Arnage, Azure and Brooklands models produced between 2007 and 2009. There have been no reported accidents.

3. There are recalls for everything from fire hazards to braking problems but a recall for a faulty label? Toyota has done just that. The label identifying the airbag, found on the back of the sun visor was prone to fall off in the 2010 Corolla models. It may seem the problem poses no imminent danger, but future owners of the vehicle may be unaware of the airbag’s existence and could possibly be injured by unexpected deployment.

4. Think your vehicle is only dangerous while it is running? Think again. A problem for Ford with a faulty cruise control switch effecting model years ranging from 1992 to 2003 wins the award for largest recall in history. The company began recalling vehicles in 1999 after reports that the switch could overheat hours after the vehicle had been parked. The problem was blamed for both house and garage fires. The NHTSA has reported more than 1,472 consumer complaints including 65 fires. The auto giant recalled 9.6 million of these vehicles in 2008 and followed up in 2009 by adding another 4.5 million vehicles for a total of 14.1 million cars recalled.

5.More recalls are related to fire hazards than you would expect. General Motors recalled 1.5 million of its vehicles across six brands for a heated washer fluid system that could potentially malfunction and catch fire. According to GM, the internal thermal-protection device in the module did not function properly and there was no fix. The company is removing the faulty module and will reimburse owners $100. The company reported five fires, but no accidents or injuries. Eighteen models from 2006 to 2009 are involved in the recall: They are the  Buick Lucerne; Cadillac DTS; Hummer H2; 2008 to 2009 model year Buick Enclave; Cadillac CTS; 2007 to 2009 model year Cadillac Escalade, Escalade ESV, Escalade EXT; Chevrolet Avalanche, Silverado, Suburban, Tahoe; GMC Acadia, Sierra, Yukon, Yukon XL; Saturn Outlook; and 2009 model year Chevrolet Traverse.

6. Even Honda has trouble with fire hazards. The manufacturer recalled about 140,000 Fit compact cars in the U.S. for a faulty window switch that could potentially smoke, melt or catch fire if exposed to liquids. The company reported seven confirmed cases in the U.S., two of which involved fires. The company said it appears water leaking from an open window is the most common cause for the malfunction.

7. Recalls are not always due to  faulty parts. Outside influences as innocuous as a plastic bag can be the source of trouble for automakers. Volkswagen recalled about 58,900, 2006 model year Jetta’s, after it was discovered plastic bags could get caught in the undercarriage and chafe against a fuel line, creating a leak and ultimately a fire.

8.Even police vehicles are not immune from recalls. Ford recalled 109,664 Crown Victoria Police Interceptors, model years 2003, 2004 and 2005, after they discovered the wheels had weld problems. The welds could crack, and  in some instances, cause rapid air loss from the tire. The NHTSA reported that in one incident, a Pennsylvania State Police car “failed during a high-speed pursuit, resulting in the loss of control.”  The police squad driving the vehicle suffered minor injuries from the incident.  In another case cited by the NHTSA from 2003, a Colorado police officer reported his wheel rim split while he was driving only 10 miles per hour.

9.Faulty parts tend to be the driving factor behind most recalls, but its truly unusual when it is the car itself. Volkswagen is recalling 27, 2010 model year, new Beetle sedans and new Beetle convertibles manufactured between Sept. 1 and Sept. 22, 2010 because they have failed to comply with new barrier test safety requirements that went into effect Sept. 1. The fix – dealers will replace those 27 Beetles with models made before Sept. 1 when the new regulations went into effect.

10. Mazda gets the award for the creepiest recalls. In March 2010, the automaker recalled about 15,000 Mazda 6 models in the U.S. with 2.5 liter engines made between April 2008 and February 2010 because of spiders – yes spiders. Apparently the spiders have made their homes in the ventilation systems of these vehicles weaving webs that clog the ventilation systems, creating a back-up of pressure that can cause a fuel leak and possible fire. Mazda said the creepy crawlies have been found in 20 of the affected vehicles.

How an automaker handles a recall or safety situation can make or break a consumer’s perception of brand reliability and ultimately affect the company’s bottom line.

Toyota’s handling of the unexplained acceleration problem with its vehicles not only damaged its reputation, but cost the automaker millions of dollars in fines, after it was learned the manufacturer did not properly and promptly notify the NHTSA of the problem.

Consumer complaints to the NHTSA allows the agency to track potential problems and stay on top of emerging safety situations within the auto industry.

Gregory E. Magno, an investigator with the Office of Defects Investigation at the NHTSA, recently shared the role a reliable consumer complaint process plays in monitoring the automotive industry.

“Consumer complaints are one of the NHTSA’s most important source of field data,” Magno said during the 2011 SAE Government/Industry Meeting held in Washington D.C.

The agency has attempted to make filing a complaint as easy as possible for consumers through its website www.safercar.gov. The site also allows consumers to look into complaints that may have previously been filed against a certain vehicle.

Some auto manufacturers take steps to resolve the problem immediately by informing consumers and the NHTSA of safety problems on their own. Others, as with the Toyota acceleration problem, face pressure from NHTSA after mounting consumer complaints.

“Some companies do a better job than others recalling cars and fixing them,” says CARS spokesperson Rosemary Shahan.

If there is no recall, but a number of complaints filed, buyer be wary. In some cases it can take years before a recall is issued.

This article was originally published by Life Quotes, Inc.