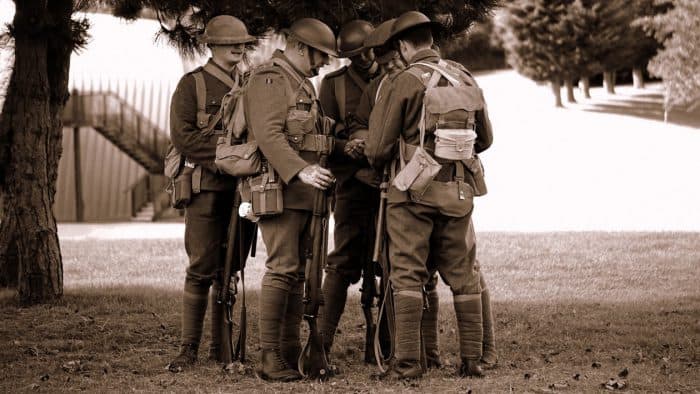 The War Risk Insurance Act was enacted by the United States Congress in 1914 to ensure the availability of war risk insurance for shipping vessels and individuals during World War I, and it established a Bureau of War Risk Insurance within the Treasury Department to issue insurance policies and pay claims.

The War Risk Insurance Act of 1917 amended the insurance program in 1917 to provide life insurance coverage to sailors in the United States Merchant Marine.

The War Risk Insurance Bureau’s relocation to the Natural History Building was the most significant impact of World War I on the Smithsonian. It was founded to provide life insurance for soldiers and sailors en route to the front lines, and it grew exponentially alongside the armed forces. The Smithsonian Institution closed its exhibits and turned over the building to this vital service. Curators were busy reaching out to those on the front lines to document what was sure to go down in history, even as their exhibit space was shrinking.

During the previous war, legislation was enacted to ensure that the man suddenly thrust into uniform would not suffer as a result of obligations he had undertaken as a civilian, or that he would not be at the mercy of creditors who might take advantage of his military absence. The Soldiers’ and Sailors’ Relief Act of 1940 followed a similar format. This Act contains provisions under the heading of “general relief” that allow court action detrimental to the interests of servicemen to be stayed or deferred until the court appoints an attorney to represent the defendant. A judgment rendered against a man in military service may be opened for defense by that person after his return to civilian life, under certain conditions. Furthermore, the period of service shall not be considered elapsed time under any statutes or regulations of limitation for any court proceedings involving the serviceman.

Another provision of the law prohibits the eviction of dependents due to foreclosure or unpaid rent; provides reasonable protection against the seizure of goods under installment purchase agreements; and protects insurance policyholders against unfavorable option exercise by an assignee, such as surrendering for cash without the policyholder’s consent. The act also provides for certain tax breaks and prohibits unjustified tax sales.

It also relaxes the general law on homesteads and public lands that applies to people who join the military. In general, the law prohibits interest charges on outstanding military obligations of more than 6% per year. This law allows for a variety of other assistance, postponement, and additional relief measures.

Most servicemen in civilian life had life insurance, and the decline in their earning power has made it difficult to continue making premium payments. Article IV of the act establishes the rights and procedures pertaining to commercial life insurance policies in which premiums are due while the owner is in the armed forces and for the next two years. If he is unable or unwilling to pay these premiums out of his own funds, or if he does not arrange for an allotment from his military pay for the purpose, he has the right to the benefits of Article IV, which constitute a guarantee by the Veterans Administration that the insurance with a face value of no more than $10,000 will be kept in force through an arrangement with that agency.

Servicemen must pay income tax, but collections are postponed for no more than six months after their discharge. A state or municipality may sell a serviceman’s property for delinquent taxes or improvement assessments, but this can be avoided if the serviceman files an affidavit with the officer whose job it is to enforce the collection of such taxes or assessments. The court may stay such sale for a period of up to six months following the serviceman’s discharge.

The Federal Government, as it did during the previous war, is now underwriting the extra-hazards of war by making National Service Life Insurance available to members of the armed forces. Officers and men can purchase this insurance up to a $10,000 maximum. It’s a five-year term policy with premiums deducted from your paycheck.

After a year, a serviceman can convert his policy to one of three permanent forms: ordinary life, 20-pay life, or 30-pay life. Beneficiaries are limited to the wife, child, parent, or brother and sister. The terms provide for claim payment in monthly installments for 20 years if the beneficiary is under 30 at the time of the serviceman’s death, or for life if the beneficiary is 30 or older at the time of the serviceman’s death.

In the event of the insured’s total disability for at least six months and prior to the age of 60, the policy provides for a waiver of premium payment during such disability, allowing the insurance to remain in force.

For a 30-year-old serviceman, the monthly cost of convertible term insurance is around $7 for a maximum of $10,000.

Amendments have resulted in an automatic extension of coverage in cases of death, disability, or capture occurring prior to April 20, 1942, with service members presumed to have applied for $5,000 policies if they did not already have that much Government insurance.

If a serviceman applies for insurance during his first 120 days in the armed forces, no physical examination is required.

A new law has been passed that allows a serviceman to apply for insurance without having to undergo a medical examination or provide a medical history statement for another 120 days beginning April 12, 1943. This law is set to expire on August 10, 1943. He may take out $10,000 worth of insurance if he does not already have any, or he may increase his insurance to $10,000 worth by purchasing an additional policy or policies.