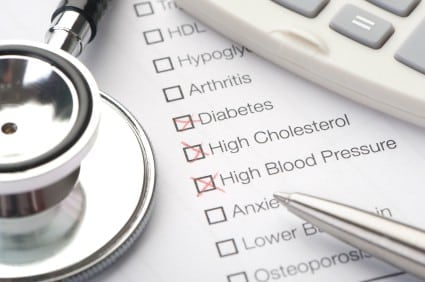 The number of people with diabetes is on the rise, as sedentary lifestyles, super-sized meals and expanding waistlines add up to insulin resistance and a host of other problems.

Diabetes is a major cause of heart disease and stroke.  It is also the leading cause of kidney failure, non-traumatic lower-limb amputations and new cases of blindness.  People who are diagnosed with diabetes instinctively think of buying life insurance or increasing current coverage limits.

The good news is this:  if your diabetes is stable and you are in compliance with doctor’s instructions, life insurance is readily available and attractive prices.  When you apply for life insurance, of $30,000 or more, expect the life insurer to check all facets of your medical history.  The signing of an application will authorize the insurers to request your medical records and prescription drug history, to name just two of many outside reports that will be used to underwrite your application.  The best that any agent can do is give you an estimated rate, so understand the everything is preliminary until the insurers complete their review and makes a firm offer.  Your history of caring for yourself – such as regular doctor visits – will go along way towards earning the best rate possible. .

“I think the important thing is we can insure people and the way they can get the best rate is to be seeing their doctor to control all those risk factors,” says Craig Davidson, chief medical officer with The Hartford.

Insurance companies will want to see an applicant’s medical records to make sure they’re following their doctor’s orders.  The A1C test—also known as the hemoglobin A1C or HbA1c test—is a simple blood test that measures average blood sugar levels over the past 3 months.  It’s one of the commonly used tests to diagnose prediabetes and diabetes, and is also the main test to help you and your health care team manage your diabetes. Higher A1C levels are linked to diabetes complications, so reaching and maintaining your individual A1C goal is really important if you have diabetes.

“What we look at is other cardiac risk factors when we underwrite and that would be how well their blood pressure is controlled, how well their cholesterol is controlled, what their weight is doing and also are they smokers or not,” Davidson says. “Someone with diabetes is two to four times the risk of having a heart attack, so that’s why it’s so important to get these other risk factors under control, besides the blood sugar.”

Brian Ashe, president of Brian Ashe & Associates, says an A1C level would need to be less than seven and is probably the factor that most insurance companies look at the closest.

“They’re going to consider a lot of things: how compliant they are, what their weight is, how their diet is, find out what their triglyceride levels are, their blood pressure, cholesterol level and so forth,” said Ashe. “I think a lot of consumers are just unaware that any coverage would be available to them if they’re diagnosed as being diabetic.”

We polled 50 leading life insurance companies in November 2022.  The chart below reveals the best possible monthly prices for type 2 diabetic on a popular 20-year, medically underwritten, level term life policy that covers death by any cause, at any time, in any place, except for suicide within the first two policy years (one year in some states). The sample 20-year term life rates shown require initial medical underwriting and are also renewable, without evidence of insurability, to age 90+.  Most plans are convertible to permanent insurance without having to undergo any further underwriting.  The right of conversion without any health questions in a term life plan can be very important to a diabetic who’s condition deteriorates later on and is unable to get life insurance in the open market.

Type 1 diabetes, previously known as juvenile diabetes, typically strikes at a young age and requires insulin. Anyone with this condition typically faces more expensive life insurance premiums than other kinds of diabetics, as the disease has a much longer time period with which to wreak havoc on the body.

“They’re going to pay more than someone else, I can’t tell you how much. It depends on how old they are, how well they’re controlled and how long they’ve had it,” Davidson says.

It’s even possible that a Type 2 diabetic, who maintains their blood sugar, lives a healthy lifestyle with a proper diet and exercise could wind up paying the same life insurance premium as the general public.

Gestational diabetics typically strikes pregnant women and in many cases it only lasts until after they give birth. Life insurance companies won’t insure a pregnant woman, even if she’s not diabetic, but will wait until after her pregnancy to see if her diabetes was temporary.

Those who are prediabetic can also obtain coverage but should keep in mind that the same issues that put them at greater risk for diabetes also make it more expensive for them to buy life insurance.

There’s a cluster of conditions, known as the metabolic syndrome, that make it more likely someone will develop diabetes as well as heart disease and stroke. The Mayo Clinic defines these factors as increased blood pressure, high blood sugar levels, excess body fat around the waist or abnormal cholesterol levels. Having one of these conditions, or especially a combination of them, can result in serious health problems.

Ashe says someone with these risk factors, who is considered close to being a Type 2 diabetic, could wind up paying around 25 percent more in premiums than someone with normal health.

“A person who is either in the midst of developing a problem or who has been experiencing a problem for a longer period of time and then piles the diabetes in on top of it, that’s going to present more of a challenge to the underwriters because they know that the combination of factors is really going to significantly increase mortality,” Ashe says.

He suggests anyone with diabetes or prediabetes that is looking for life insurance should have their agent check with multiple companies, as some are better at underwriting policies for diabetics than others.

For those who are unsure if they would qualify for a policy, Ashe says they could make a preliminary inquiry to see if coverage would be available and at what rate, without actually filling out an application.

The insurance company can request medical information and give an idea of what someone’s rating would be, which determines the premium they would pay. Their rate would not be set in stone; it would be contingent upon a medical exam.

Ashe says the benefit of this is it gives someone an idea of what coverage they could be eligible for and how much the premium would probably be. If someone found out they were an unlikely candidate for life insurance, they could always consider a policy later on without having to declare that they were rejected on a previous application.

The bottom line is that diabetics can get life insurance but just like anyone else, it’s a good idea for them to heed their doctor’s advice and do what they can to remain healthy. Just like individuals without diabetes, staying healthy makes it easier to buy a policy and at a better rate.

“If someone was going to apply for insurance I tell them well we’d be looking at those factors like are they following up with their doctor and following their doctor’s recommendations and controlling all of their other risk factors,” Davidson says. “If they have good control and if those other cardiovascular risk factors are controlled many of them could qualify for standard rates, and that is significant because at one time people couldn’t get insurance.”