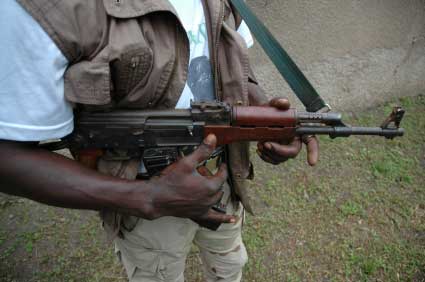 Whether you’re headed to Haiti as a volunteer helping to restore the earthquake-ravaged country, or to Iraq as an employee rebuilding its infrastructure, or even off the Somalian shores as ship crew member and scuba diving adventurist, you or your boss will most likely be looking at higher premiums—if you can get life insurance at all.

All three countries are included on the U.S. State Department’s travel warning list, which is updated constantly, and which insurance brokers say is used to determine how much you will be charged for a new or updated life policy—or if you will be offered a policy altogether.

According to the Web site, travel warnings are issued to describe long-term, protracted conditions that make a country dangerous or unstable, or when a U.S. embassy or consulate closes, restricting government aid to its citizens there.

The list includes war-torn countries like Iraq and Afghanistan, Chad and Sudan with their rebel violence and Mexico with its violence among drug cartels. In each case, the chances of being kidnapped and held for ransom, injured or killed in the crossfire are real.

“The more unstable and dangerous a country is and the more likely something bad will happen, the less likely you are to get insurance, not even from Lloyd’s of London, which provides specialty insurance if you can pay the price,” said Ryan Pinney, a high-risk specialist with Pinney Insurance Center, Inc. in Roseville, Calif.

Members of the military going into war zones have coverage through the government-provided Servicemen’s Group Life Insurance, which Pinney said costs about $24 a month for $400,000 coverage. In addition, many private insurance companies cover all military members at no extra cost,” said Michael Tessler, president of Brokerage Unlimited in St. Louis, Mo.

However, most companies won’t insure you if you are going to a war zone as a contractor or working on an oil rig off the coast of Nigeria.

Iaian Donald, with Control Risks, an independent specialty risk consultancy, said some companies that send workers to dangerous places will pay for their employees’ life insurance as part of their accident policy. Huge corporations like Haliburton, have global policies to cover any destination.

“The price can be nominal if the company is big enough,” Donald said. “Companies that send employees to a particularly dangerous place, including foreign journalists, can buy a policy from a high-risk specialist – such as Lloyd’s of London – for a certain number of staff.”

Pinney says if you’re just flying into Afghanistan’s main airport, which is a green zone, and don’t leave the area and can document that, insurance companies will insure you.

If you’re doing long-term missionary work in a dangerous country with no easy access to good medical care, few insurance companies will insure you, Tessler said.

If you’re a member of the American Red Cross or the Peace Corp., you will need to have your own life insurance as neither agency provides it for their volunteers. You would likely be limited to standard health class if embarking on a two-week trip to help a dangerous country like Haiti, which means you’ll have a mid-rating if you are relatively healthy. Underwriters will look at where you’re going, what you’ll be doing while there and how long you’ll be gone, to determine a price.

“It could cost you as much as 25 to 50 percent more for a policy because of the danger,” Pinney said.

If you plan on indulging in extreme sports activity like scuba diving or rock climbing during your off-work hours, expect to pay even more. You are rated up two times for each sport you do. “You could pay 50 cents per $1,000. Multiply 50 cents by a $100,000 policy and it gets expensive. If you buy the cheapest 10-year term insurance you would pay $160 to $180 a year for a $500,000 policy if you’re rated preferred best, and $310 to $360 a year for a standard policy if you do these sports,” Pinney said.

Following is a list of the top 10 most dangerous countries in the world right now, according to Control Risks. The company advises and assists corporations, government and non-government entities to help reduce their and their employees’ risks. Some countries are just dangerous in specific areas, as listed, not necessarily the country as a whole.

For example, if there is a high risk for travel, foreign visitors from the U.S. may find themselves in a situation where there is a chance of being kidnapped when traveling by foot or land. Or, they may be unable to get a flight out of the country if civil or political unrest erupts. Also, some countries are so dangerous for foreign travelers that there is a high probability that if something were to happen to them, the embassy in that region would not be able to help.

The countries are listed in alphabetical order. All are extremely dangerous in terms of security, most in terms of travel, and all are on the U.S. State Department travel warning list.

1. Afghanistan: With the war on terror shifted from Iraq to Afghanistan and the risk of terrorism high, the country as a whole is considered extremely risky for travel, according to Donald. Control Risks rates it extremely risky when it comes to operating a business in various regions of the country. For instance, there are risks that would impact a business logistically in addition to fraud and corruption which often includes exposure to officials seeking bribes. Also, there are high-security risks, a great potential for terrorism and extreme political unrest.

2. Chad, Sudanese border: The two countries have been engaged in hostile relations for years, with each supporting rebel groups in the other country. The battles have left many dead, particularly in the Darfur region of Sudan. Control Risks rates it extreme for security, high for political unrest, travel and business ventures and low for terrorism.

3. Congo (North Kivu province): Militia violence against the government in this African country has placed it high on the warning list. It received extreme ratings for security and travel, political unrest and business operations and low for terrorism.

4. Iraq: U.S. troops still are primarily in this country now to keep peace between the Arabs and Kurds, but hostile relations between the two sides continue. It is still rated extremely dangerous for security, terrorism and travel, high for politics and business operations.

5. Pakistan: The threat of terrorism and the security factor against the government have placed the entire country on high-security alert, with the Federally Administered Tribal Area the only area in the world to receive extreme risk ratings across the board from Control Risks. The military has been especially active in this Afghan Taliban and al Qaeda stronghold.

6. Palestinian Territories, Gaza Strip: Ongoing fighting between Palestinians and Israelis over this portion of land has consistently placed this area on the travel danger list. Control Risks rates it extremely dangerous for political, security and travel reasons, high for business operations and low for terrorism.

7. Somalia: With no working government, law enforcement or institutions, and with pirates attacking ships on the water, this country has been labeled dangerous both on land and water. It has been given extremely dangerous ratings in all areas but terrorism, where it was given a high rating for danger by Control Risks.

8. Sri Lanka: Fighting government factions have resulted in one of the longest and bloodiest wars in Asia. The northern province is particularly dangerous, receiving extreme ratings for political, business operations and security reasons and high ratings for terrorism and travel.

9. Sudan, Darfur: Decades of civil war have included genocidal violence, rapes and mass displacement against civilians, many of whom are left in refugee camps. It received extremely risky ratings in security and travel, high in political unrest and business operations and low in terrorism.

10. Yemen, Saada Province: Fighting between the Yemeni army and rebels in this Northern Province has left many dead and buildings destroyed. Also, it has left the Saada region with an extreme rating for security and travel, and a high rating for political unrest, business operations and terrorism.