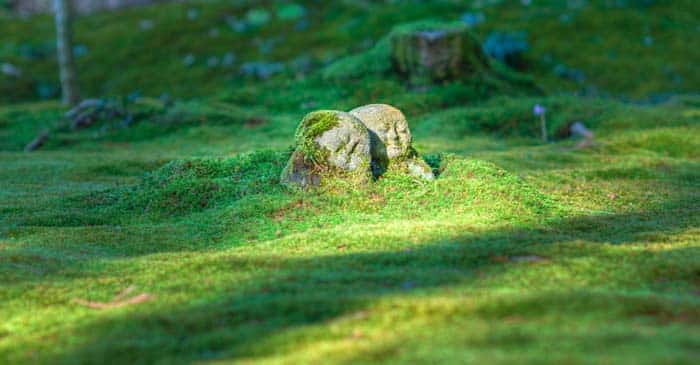 Death is going green. A growing number of people are eschewing traditional end of life rituals for simpler, more environmentally friendly, and in many cases, less expensive green burials. Some casket manufacturers and funeral directors are responding to the trend.

Toxic embalming fluids, metal caskets and concrete vaults are prohibited, instead the deceased are buried in biodegradable caskets made of wicker or pine, or simply wrapped in a shroud, says Joe Sehee, executive director of the Green Burial Council, a New Mexico-based nonprofit organization that encourages sustainable death care.

Green burial sites are aesthetically pleasing, often offset with towering trees and fields of wildflowers. Headstones are replaced with small fieldstone markers or no markers at all. The difference between a traditional burial site and a green cemetery is that they are designed to protect and restore the land, Sehee says.

“People want to be buried under a tree or in a field. It’s nothing new. They’ve been doing this for more than 100 years. People find solace in being buried in a peaceful surrounding,” Sehee says. He adds there are no state laws mandating the use of burial vaults or embalming fluids. It’s usually the cemetery’s policy.

The manner of burial makes no difference as far as life insurance or burial insurance is concerned, according to Steven Brostoff, spokesman for American Council of Life Insurers (ACLI), a Washington, and D.C.-based trade association. “Life insurance is for financial protection; it pays benefits upon death,” Brostoff says.

There are no statistics on green burials. However, in a 2007 survey by AARP 21 percent of Americans older than age 50 said they would prefer an eco-friendly burial, Sehee says. He says a March 2010 survey commissioned by the International Cemetery, Cremation and Funeral Association found 25 percent of those polled like the idea of environmentally- friendly burials.

Normal burials use toxic embalming fluids that contaminate the soil, concrete vaults, large headstones and caskets made of wood or steel that never degrade, staying in the ground forever. Cremations using older methods spew carbon emissions into the air, according to Sehee.

“It is definitely a growing trend. It is equivalent to what cremation was 20 to 30 years ago,” says Edward Bixby II, proprietor of Steelmantown Cemetery Natural Burial Ground in New Jersey.

Bixby says it’s not just baby boomers, environmentalists and those looking to save a dollar fueling this trend. “A good 80 to 85 percent of my business doesn’t come from environmentalists. They’re just everyday people who don’t want to be embalmed,” he says.

Bixby says the average cost of a burial at his cemetery ranges from $2,500 to $4,000, compared to the $8,500 average cost of a traditional funeral in New Jersey, but Sehee says costs of a green burial can increase if a person chooses a more expensive biodegradable casket such as a seagrass casket. It may be cheaper to use an old blanket or shroud, or be buried at a cemetery in a different state. Only 40 states have green cemeteries to date.

Bixby says in 2006, the first year he opened, he did six green burials and about a dozen pre-needs. The burial number is the same, but the pre-needs are growing substantially. He says his average customer is between the ages of 30 and 55. As they reach the natural dying age, he expects the number of burials to jump.

Bixby’s cemetery is one of 23 certified green cemeteries by the Green Burial Council. It has 10 acres, nine of which are wooded. Graves are marked by fieldstones and Bixby knows exactly where every one is buried if families can’t find the location.

Sehee has a list of more than 300 certified green providers, including cemeteries, funeral homes and products such as biodegradable caskets, shrouds and urns. This is up from only a dozen providers total at the beginning of 2008.

Green burial is described by the Green Burial Council as a way of caring for the dead with minimal environmental impact. It conserves natural resources, reduces carbon emissions, protects worker health and restores and/or preserves the habitat.
Just how green you want to go is up to you. Burial grounds come in various shades, according to Joe Sehee, executive director of the council.

Hybrid burial grounds: Perhaps the most common form of green burials today, they are conventional cemeteries that prohibit the use of formaldehyde in embalming, metal caskets and concrete vaults.

Natural burial grounds: They have the same requirements as hybrids, but are designed, operated and maintained to be aesthetically pleasing, as well, Sehee says. They use plants and materials native to the region.

Conservation burial grounds: In addition to meeting all the requirements for a natural burial ground, these must also adhere to a number of protocols that ensure burials never degrade an ecosystem. Where possible, they must facilitate ecological restoration. An established, independent conservation organization must serve as steward of this land to guarantee that the standards for conservation burial, set forth by the Green Burial Council, will be upheld in perpetuity.

Cremation: While purists denounce cremation due to its burning fossil fuels, Sehee says a $4 donation to a carbon fund offsets any emissions created from cremation. Also, the council has been working with the Cremation Association of North America to set standards for more environmentally friendly cremations by making available options for recycling medical parts such as dental fillings, choosing a more fuel-efficient cremation container and participating in a program that has some environmental purpose, such as generating money to facilitate conservation.

Death is typically not an upbeat subject, but today, there are a number of ways to memorialize your life that deviate from the traditional. Here are a few “alternative” funeral options you may not know about.

Freeze-dried: Ashes to ashes, dust to mulch? Considered to be a more “ecologically friendly” approach to burial, this is when the body is freeze-dried in liquid oxygen at -18 Celsius and crushed into a fine powder. The “organic powder” is placed in a cornstarch coffin where the soil converts it to compost. Varying companies provide this service.

Swimming with the fishes: Thinking about a burial at sea? If so, it’s comforting to know that your cremated remains can be put to rest at the Neptune Memorial Reef Project in Miami. The 16-acre memorial is the home of 125,000 cremated remains. Prices for an underwater placement range from $2,000 to $5,000 in the Atlantis-like memorial. The prime spot is dead center of the reef, which brings in higher burial costs. Mourners can watch the placement of remains from a glass-bottom boat.

Baubles, bangles and beads: Ever wanted to wear the dearly departed around your finger or your neck in the form of a nice pear-shaped diamond cut? Your loved one can be with you for all eternity by having their cremated parts set into a diamond or any gem of your choice. The diamond can be mounted into rings, pendants and earrings. Diamonds consist of 100 grams of cremated ashes and can be cut to match whichever carat size your beating heart desires. So far, there are a handful of firms that provide this service, but most are in the United Kingdom.

Dead space: You can also launch your loved ones remains into outer space for the cost of $6 million per kilogram. Houston, Texas-based Celestis charters lunar mission modules that spread cremated remains among the stars. Star Trek creator Gene Roddenberry was one of the more famous names who had his cremated remains shot into orbit.

Ever been called a firecracker? You can actually take it literally this time. For your final five minutes of fame, Heavens Above Fireworks in the United Kingdom will attach your ashes to a rocket as part of a spectacular fireworks display for all to see. For an additional cost, the company will spell out your name in the night sky or leave your loved ones with a personalized farewell message.

Work of art: Talk about avant-garde! An artist will memorialize your life by mixing your ashes into a painting for a starting cost of $899 per piece.

As a writing utensil? In the event, you don’t feel useful in the afterlife… A British designer will convert your ashes into pencil leads and engrave your name in the foil on the side.

Cryonics: Often used as humorous fodder in cartoons, cryonics is very real. There are currently two companies the Cryonic Institute and Alcor that provide cryonic facilities for 200 people who are hoping to cheat the afterlife and live again in a fully preserved state. Cryonics involves freezing your body at 120 degrees Celsius to prepare you for an expected thawing at some point in the future. There are a number of “cryonic” services that come with hefty fees, but the average cost starts at $150,000.

The ultimate tree-hugger package: Far too technical to discuss here, scientists can mix and mingle your DNA with that of a plant for a mere £20,000. Most people opt to be a tree. Biopresence began as a student project at the Royal College of Arts in London.

As fluid as water: Aquamation or liquefying a body is the process of returning your remains back to its natural watery state. The human body is about 70 percent water.  Once the remains dissolve into water, the water can be used as a fertilizer for plants and flowers. The concept is the same as cremation without the use of an incinerator, but rather the remains are put into a water capsule for liquification. This burial is considered more environmentally friendly than traditional burials.

To learn more about the average costs of funerals in the United States, go the the National Funeral Directors Association statistic report.