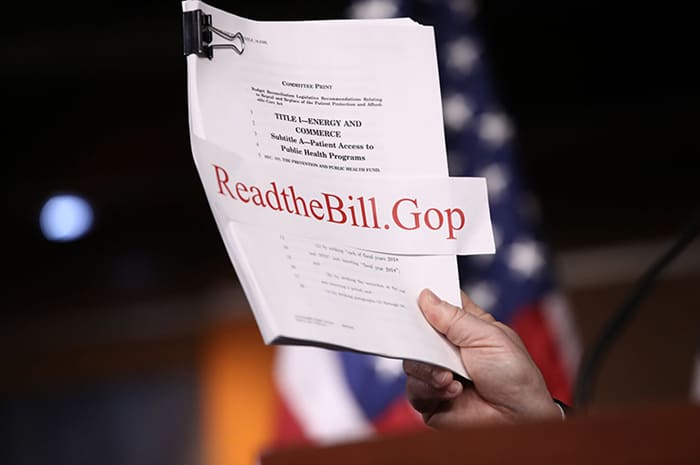 Could Republicans make employer-provided health insurance taxable? And how do you appeal a lung cancer screening denial from your insurance company? Also, can pharmacists prescribe medications? Here are some responses to recent reader questions.

Q: I’ve heard that Republicans intend to change the system so that I must pay income taxes on my health-care benefits. Is this true?

It’s far too early to predict what will happen as Republicans work to overhaul the health-care law, but this option has been included in several early Republican plans. However, legislation unveiled Monday night by the influential House Ways and Means Committee would keep the health-care law’s “Cadillac tax” on insurers and employers who provide generous coverage rather than taxing the workers who receive it.

Beginning in 2020, Obamacare imposes a 40% excise tax on employer-provided plans that cost more than $10,200 for individuals and $27,500 for families. The Ways and Means Committee’s proposal would impose the tax but postpone its implementation until 2025.

The Republican proposal would not change current federal tax provisions that exempt health insurance premiums from federal income and payroll taxes. For decades, lawmakers have considered capping or eliminating the tax break.

A number of recent Republican health-care proposals have also targeted it. For example, when he was in Congress, Health and Human Services Secretary Tom Price proposed capping the amounts that could be deducted from taxes at $8,000 for single coverage and $20,000 for family coverage. The concept is also included in House Speaker Paul Ryan’s Better Way plan.

The GOP will maintain the ACA’s ‘Cadillac Tax’ on health insurance.

According to the Congressional Budget Office, the tax exclusion for workers is the single-largest federal tax break, accounting for more than $250 billion annually. Some economists and policy experts believe it discourages people from considering health-care costs. However, employers and labor unions have voiced strong opposition, claiming that if the tax break is reduced or eliminated, employers will stop providing health insurance.

It’s early days, and what’s on the table today might not be there tomorrow. Box 12 on your annual W-2 wage and tax statement will tell you how generous your own benefits are. The health law required employers to include the cost of their employees’ health insurance coverage on the form. But keep in mind that figure is only for your information; you owe no tax on any portion of it. At least not yet.

Q: I’d like to be tested for lung cancer. I’m 60 years old, and based on my smoking history, I believe I qualify for screening. However, my job-based plan refused to cover it. Is there anything I can do to help?

You can file an appeal with your health insurance company and, if necessary, an independent panel of experts.

Health plans must cover preventive care recommended by the US Preventive Services Task Force without charging consumers under the health law. The only exception is for plans that are grandfathered under the law because they were in place in 2010 and have not significantly reduced benefits or increased consumer costs since then.

If you’re between the ages of 55 and 80 and have smoked for at least 30 “pack years” — a pack a day for 30 years, two packs a day for 15 years, or a similar calculation — the task force recommends an annual low-dose CT scan.

You’re clearly within the test’s age range. If you meet the smoking guidelines as well, Erika Sward, assistant vice president for national advocacy at the American Lung Association, recommends following the instructions on your health plan’s website for filing an appeal and enlisting your doctor to write a letter explaining why the screening is medically necessary.

If your health plan still refuses the screening, you have the right under the law to have the decision reconsidered by an outside, independent reviewer. If your internal appeal is denied, Sward recommends contacting your state insurance commissioner as well.

“People don’t realize that the insurance commissioner has a health policy staff that should be able to help people work through an appeal,” she said.

All of this assumes you don’t have any symptoms of lung cancer, such as coughing up blood or having a persistent cough. If you have symptoms, your insurance should still cover the CT scan. However, because it is considered a diagnostic rather than a preventive procedure, you may be required to pay a co-payment or other cost sharing.

Q: Are pharmacists allowed to prescribe prescription drugs to patients in any states?

Yes, but what they are allowed to do varies greatly. Depending on state law, pharmacists may be allowed to prescribe prescribe drugs independently, as part of a collaborative practice agreement with a physician, or under a “standing order” or other state protocol that allows them to prescribe drugs such as emergency contraception or naloxone, which counteracts opioid overdoses.

Physician groups, on the other hand, are skeptical. They argue that pharmacists are an important part of the care team, but they are generally opposed to pharmacists prescribing drugs because it may lead to fragmentation of care.

“We want to make sure care is coordinated and integrated for the patient,” said Dr. Michael Munger, president-elect of the American Academy of Family Physicians.