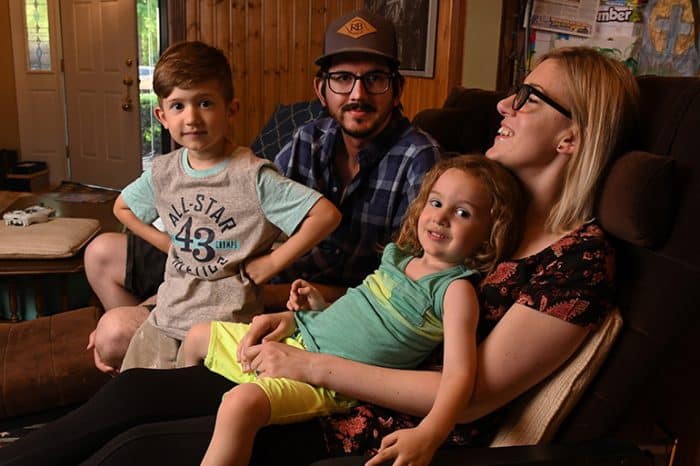 Andy and Serena Ryan get their health coverage through the state’s Affordable Care Act insurance exchange and are increasingly anxious about it.

Serena Ryan, 31, who left her part-time job as a nurse in 2016 to care for and home-school the couple’s two children, ages 5 and 3, calls the coverage a “blessing.” Andy Ryan, 33, is a self-employed marketing consultant.

“The health insurance has allowed us to live the way we want, to be at home with the kids and create our own business,” Serena Ryan said. “We know we needed the coverage in case something happened, even though it’s a big expense.” But turmoil in the ACA marketplaces has the family “holding our breath,” she said.

In some states, including Delaware, insurers have announced that next year they will not participate in the exchanges, also called online marketplaces, that serve consumers who do not get insurance at work or through government programs such as Medicare or Medicaid. The insurers blame financial losses and mounting uncertainty over federal funding and rules that govern the exchanges.

For example, the Trump administration has not committed to continuing a program that reduces deductibles and copayments for some low-income families. The program reimbursed insurers $7 billion in 2016. Without the funds, insurers and analysts say, premiums could rise 15 to 20 percent on top of other proposed hikes.

The ACA’s uncertain fate in Congress has added to the concerns.

In Delaware, two insurers offered coverage through the exchange over the past three years: Aetna and Highmark Blue Cross Blue Shield, a Pennsylvania-based company.

But Aetna announced last month that it was dropping out of the Delaware exchange in 2018. That could make Delaware the seventh state with only one insurer in its exchange. The others are Alabama, Alaska, Oklahoma, Nebraska, South Carolina and Wyoming. And 11 states are down to just two insurers.

In addition, portions of some states face the prospect of having no insurer in 2018.

“Going down to one insurer is a challenging situation for sure,” said Trinidad Navarro, Delaware’s insurance commissioner. “Competition makes a difference, and the current administration in Washington is not making things any easier. We expect Highmark to request significant premium increases for 2018.”

Having access to one insurer can also mean consumers have fewer choices of doctors and hospitals if that single insurer offers a restricted network of providers, said Cynthia Cox, who researches the ACA and its effects on private insurers and enrollees for the Kaiser Family Foundation. “It’s not an ideal situation,” Cox says.  (KHN is an editorially-independent program of the foundation.)

‘We Need The Insurance’

John and Doris Henry, who live in Georgetown, Del., are Aetna customers. At 62 and 64, respectively, they know they must have coverage before both qualify for Medicare, even though both are currently in good health.

“We are very concerned,” said John Henry. “We don’t know what it means with one insurer and the switch we have to make now.”

The Henrys, who are retired and live on Social Security and savings, pay a $36-a-month premium after a federal health insurance subsidy is factored in.

“We could afford a bit more but not a whole lot,” John Henry said.

They switched to Aetna this year after Highmark hiked their premium to $273 a month from $140 a month.

“There was no way we could pay that,” he said. “We are worried this is what we’ll face for next year.”

Like the Henrys and millions of other Americans, the Ryans say the cost of their health insurance is a major consideration. It factors into their earning and spending decisions.

“We need to pay our bills and want to live comfortably, but we can’t afford almost $1,500 a month for insurance,” said Andy Ryan.

With the uncertainty over insurance, the Ryans also recently decided to put off having a third child.

“If we end up having to choose a plan with a $4,000 or $5,000 deductible, having a baby will mostly or totally be an out-of-pocket expense,” said Serena Ryan. “We can’t afford that right now, and maybe never.”

Across the country, insurers must indicate to state and federal regulators by June 21 whether they’ll offer coverage in the exchanges in 2018 and propose premium rates.  The proposed rates are an initial salvo in what can become tense negotiations over the summer before final rates get locked in during the fall.

Under federal rules, proposed rate hikes of 10 percent or more are subject to the closest scrutiny.

Anticipating tough negotiations with Highmark over the company’s initial rate requests, which are due June 9, Navarro said he’ll order an assessment of the request by outside experts in addition to the state’s own review.

“We will fight hard for our consumers,” Navarro said. He’s also trying to attract other insurers to Delaware.

Officials are looking for ways to improve competition in the marketplaces. Congressional Republicans may debate solutions to this problem as part of efforts to fix or overhaul the ACA. And Democrats have some suggestions too. For example, Sen. Claire McCaskill (D-Mo.) introduced legislation to permit people who live in “bare counties” without any insurers to buy coverage on the District of Columbia exchange, where members of Congress and congressional staff purchase insurance.

More states are also expected to follow the lead of Alaska and Oklahoma by creating “reinsurance” programs to subsidize payments for high-cost patients. The Trump administration has encouraged states to pursue this path under an existing ACA waiver program.

Even states with lots of insurers are taking steps to prevent defections. New York Gov. Andrew Cuomo announced June 5 that the state would henceforth bar insurers who quit the ACA marketplace from bidding for future contracts with other New York health programs, such as Medicaid.

‘It’s Going To Be Very Expensive’

Cameron and Lori Llewellyn, also of Dover, face health insurance troubles, too, but it’s not the first time.

Cameron is a self-employed construction contractor. In 2015, the cost of the Aetna coverage they bought on the individual market ballooned from $527 a month in 2014 to $1,200 a month with a $6,000 deductible. Lori Llewellyn, now 41, who had been home with their two children, decided to go back to work 18 months ago, in part to get job-based health coverage.

“Everything kind of doubled, and it happened at a bad time financially,” she said. “So I went back to work.”

Cameron Llewellyn’s company has thrived, so his wife is leaving the workplace for now. But he makes too much money to qualify for a subsidy on the ACA insurance exchange, so they will have to cover the full cost of insurance.

“I don’t know what we’re going to do now,” Cameron Llewellyn said. “We know it’s going to be very expensive.” He said the couple will look at plans with really high deductibles through the exchange, but also check out options such as insurance through building trade organizations or through a broker outside of the exchanges.

“I tell you one thing,” Cameron Llewellyn said. “I know we need coverage. But if we’re stuck paying $15,000 a year for insurance with a $10,000 deductible, I’m going to seriously consider just banking that money and going without [it].”
– Photo by Eileen Blass for Kaiser Health News