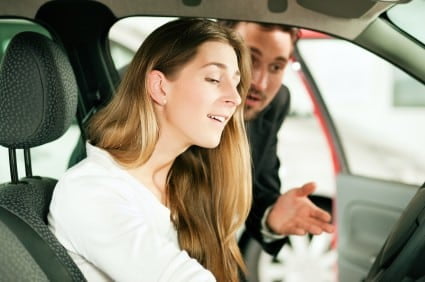 Choosing the right car can actually lead to better auto insurance rates. Shopping for cars based on fuel economy isn’t the only place where you can save.

You can also trim the cost of auto insurance by purchasing a vehicle that has enhanced safety features, accident avoidance technology and anti-theft devices. The good news is that these are often standard features in newer models.

The first step is to contact your insurance provider to find out your options, recommends David Snyder, spokesperson for the American Insurance Association.

“Because each insurance company’s rating system is different, if you currently have insurance, check with your company to learn which cars have a more favorable rating than others,” Snyder says.

Typically, older models are at higher-risk for having mechanical problems, which could also raise your rates.

“The first thing is to start off with a car that has the latest safety features,” said Brian Middleton, spokesperson for the AAA Hosier Motor Club. “Air bags and built-in child safety restraints are among the industry standards.”

“You definitely want to look for a car with electronic stability control. It is widely understood to be a very positive development,” said Snyder.

Features such as back-up cameras, side vehicle sensors and GPS tracking capability could help drive down the insurance rate, depending on the particular company or agent. Some companies also offer discounts for hybrid vehicles.

Luxury vehicles such as Lexus, Volvo and Mercedes are now equipped with anti-sleep alarms which reduces the chances of falling asleep behind the wheel during a long drive.

Generally speaking, high performance vehicles cost more to insure. As the price tag for the vehicle climbs, so does the cost for insurance.

Snyder recommends that consumers should check online with the Insurance Institute for Highway Safety (IIHS) and the Highway Loss Data Institute (HLDI) for information about the safety history of a vehicle they are thinking of buying.

These two organizations compile data, which traces the losses associated with various makes and models of vehicles over the most recent years. A vehicle with a higher loss rate will generally cost more to insure. In addition, it’s important to purchase a car that has a five-star safety rating; this will dramatically reduce insurance costs.

Size and weight play a role in how a vehicle is rated for insurance purposes. For many years smaller cars have been considered more dangerous, but that is slowly changing as enhanced safety features help these vehicles fare better in crash tests.

While a vehicle such as a Hummer 4×4 truck would seem impenetrable on the road, it’s what the recreational vehicle can do to a smaller car in a traffic accident that raises the cost to insure it. In the same vein, it would seem that driving a subcompact car would increase the likelihood of a driving fatality during a traffic accident, but enhanced airbag systems and stronger structures have increased their safety ratings over the last several years.

In fact, the Toyota iQ, which debuted in Europe first and then premiered in North America as the Scion iQ in 2011, is a micro-subcompact vehicle that has been compared to the DaimlerAG SmartForTwo electric micro-subcompact in size and cost. The iQ received a five-star safety rating by Consumer Reports because of enhanced safety features.

Certain makes and models are also popular among thieves. Expensive vehicles lure thieves but common vehicles can also be popular because they are stripped and used for parts.

It stands to reason that most mini-van’s, utility wagon’s, CRVs and Sport Utility Vehicles cost less to insure than their sleeker two- to-four-seater models. While there are a lot of myths surrounding the reason it costs more to insure a sports car, the main factor is that drivers of sports cars often take more risks when it comes to driving, thus increasing the likelihood that an accident occurs.

Before finalizing your purchase, remember to contact your insurance agent to find out just what the vehicle you have chosen will cost to insure.

“The best thing is not going with a lot of assumptions,” said Snyder. “You may think a car will be cheap to insure but really it isn’t.”

Also keep in mind that a safe driving report can also save you money on your life insurance policy as insurance companies are taking a risk by insuring you.