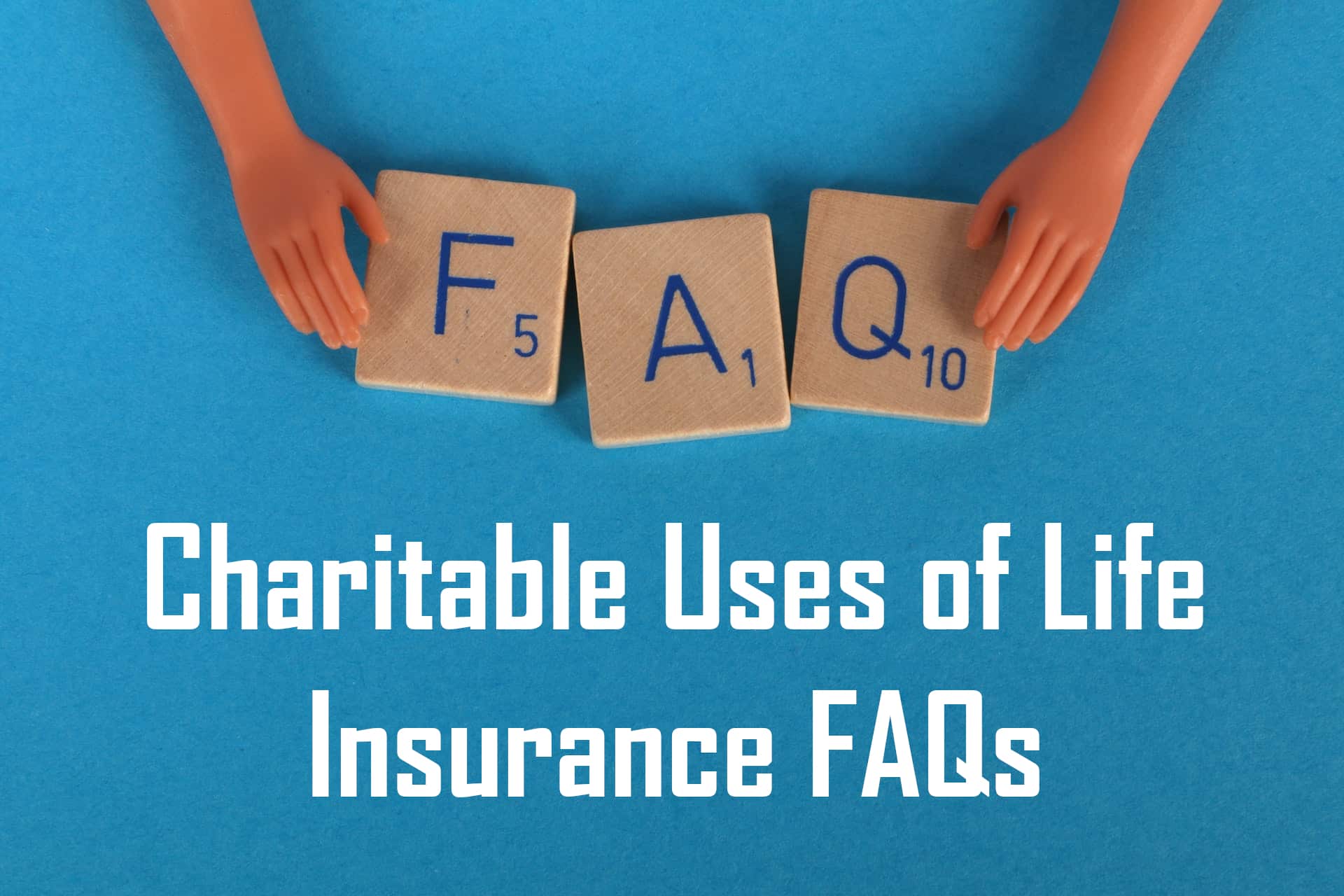 There are questions surrounding the charitable uses of life insurance. Life insurance is a big deal in any household. Without it, you’d have to worry about your loved ones. There are many options to choose from when it comes to buying life insurance. Our experts answer some questions revolving around this topic.

Question – How can life insurance combined with gifts of stock to charity help a client keep a family business in the family?

Answer – Life insurance can be used creatively to combine business continuity objectives and charitable goals in a number of ways. For instance, suppose your client wants to benefit charity, provide liquidity for her own estate, and guarantee that no one but her son can obtain the stock. One possible solution is for her to transfer stock to the charity directly. She could make a gift to her son of the income tax savings that the donation of stock generates. He could use those tax savings to purchase insurance on his mother’s life and enter into a buy-sell agreement to assure him that at her death he will have the money to buy her out. At some time in the future, the corporation could purchase the stock from the charity after an arm’s-length valuation. This provides the charity with cash and returns the stock to the corporation.

Question – Suppose a client has a very large estate and believes that if he gives his children too much when he dies, he will limit their personal growth incentives. Also, he is charitably inclined. If he leaves his entire estate to his children, his charitable objectives will not have been met and estate taxes will consume a large portion of his estate. He also knows that if he leaves his entire estate to charity, his children will have no financial security. How can life insurance be used to solve this problem?

Answer – Life insurance can serve as a partial wealth replacement vehicle to accomplish many or even all the client’s planning goals. Suppose, for example, that the client is in his middle fifties and is extremely wealthy, but has a spouse with a relatively small estate. He would like to leave most of his estate to a charity, but would also like to provide his wife with income for life and to provide each of his four children with roughly $1,000,000 after taxes to help them build their own fortunes.

Here’s one way the client can accomplish his objectives using life insurance:

Step 1: The client and his spouse can make cash gifts to each of their four children. This money is used by each child to purchase $1 million policy either on the client’s life, his spouse’s life, on the survivor of the two, or a combination of these. The children own and are beneficiaries of the insurance, none of which will be in the client’s estate, and none of which is subject to the claims of the client’s (or his spouse’s) creditors.

Step 2: Simultaneous with the large cash gifts, the client establishes a testamentary charitable remainder trust which provides that at the client’s death prior to his wife, she will receive all the income from the trust for as long as she lives. At her death, all the assets in the trust will pass to her alma mater. The entire estate remaining at the client’s death passes into this trust, which entirely eliminates the federal estate tax at his death and provides his wife with significant income for as long as she lives. This technique provides a substantial benefit to the charity as well.

The wealth replacement concept is supported by two factors. First, the four children purchase life insurance for pennies on the dollar. Second, some or all of the premiums are financed by money that otherwise would have been paid in taxes or by income that would not have been enjoyed by the client had he done nothing. In the case of a testamentary charitable gift such as the one in the example directly above, the income of the client’s spouse is enhanced by income earned on money that otherwise would have been paid in death taxes.

Answer – In the opinion of the authors, generally, neither a CRAT nor a CRUT should be the transferee of a life insurance policy. One reason that a client should not contribute life insurance to such a trust is that both trusts are required to make steady payouts of annuities to the client (and/or some other party in many cases). Adding life insurance to the trust will further drain the trust’s cash flow and leave less money for the required annuity payouts.

It is clear that a charitable remainder trust can be named recipient of a life insurance policy’s proceeds if the trust is a unitrust created during either the client’s lifetime or under the client’s will. But because charitable remainder annuity trust rules do not allow contributions after the date the trust is originally created and funded, a CRAT cannot be named as recipient of life insurance proceeds.

Answer – In both of these arrangements, donors use a charity as a conduit to purchase large amounts of life insurance on a tax-deductible basis. The plans mimicked a similar corporate split dollar technique and while the strategy may or may not have worked under insurance law, it violated several aspects of charity law, in particular private benefit rules.

The IRS effectively shut down this technique with IRS Notice 99-36, and Congress imposed harsh penalties for becoming involved in such plans by enacting legislation in December, 1999 that makes it clear that no deduction is (or was) allowed for the donation of a personal benefit contract.37 Current law defines a “personal benefit contract” as “any life insurance, annuity, or endowment contract if any direct or indirect beneficiary under such contract is the transferor, any member of the transferor’s family, or any other person (other than [certain charitable organizations]) designated by the transferor.” Charities that continue to pay premiums on personal benefit contracts must report all payments made after February 8, 1999 to the IRS on Form 8870 and must pay a 100% excise tax on all premiums paid after December 17, 1999.

Because the legislation that was passed in December 1999 made it clear that charitable split dollar and charitable reverse split dollar never did give rise to an income tax deduction, it is possible that some of the charities involved will face legal suits and may even lose their tax-exempt status as a result of their participation in promoting or agreeing to implement these programs.

Answer – This is a technique that is also growing in popularity in the noncharitable marketplace. To summarize, the charity takes out a loan from a bank to pay premiums on a pool of insurance contracts. The death benefits, or in some cases other assets of the charity, are used as collateral for the cumulative loan. This planning is problematic in several ways. Depending on the circumstances, it may trigger unrelated business taxable income, and if the policy does not perform as well as projected, the underlying contract could lapse and the charity would be forced to repay a substantial cumulative loan plus interest with nothing to show in return. Such planning should be considered highly speculative and be scrutinized carefully by legal counsel.

Practitioners are cautioned to carefully evaluate the actual performance of the policies and the economic viability of the overall strategies. The more money borrowed, the greater the risk the client is taking and the higher the cost—because the ultimate loan balance must be paid either out-of-pocket during the insured’s lifetime or from death proceeds. If the intent is to pay the loan off at death, then sufficient additional death proceeds must be purchased to satisfy the obligation and still have enough proceeds to accomplish the objective of the insurance. If premium financing is used to support a large life insurance contract, it is suggested that advisors borrow as little as possible, keep the duration of the loan relatively short, consider worst case scenarios, and develop an “exit strategy”’ before implementing the plan. Constant monitoring of policy performance and disclosure of the cost and risk to the client are essential.39

Answer – “In the context of charitable planning, these are all variations of the same plan. In Investor Owned Life Insurance (IOLI), a group of policies are established on the lives of the charity’s wealthier donors. The charity (or a trust controlled by the charity) purchases the policies and pays the premiums, sometimes using a financing or bond program arranged for by the plan promoter, for a minimum of two years. At the end of that period, the charity sells the policies to an investor or investor group. Since the investors could not otherwise purchase these policies directly, the charity effectively is renting out their insurable interest to benefit this investor group.

Many of these plans vary in how they are established—the source of the premiums, the arrangement for the charity to keep or sell the policies at the end of the contestability period, and so on—but in the long run, the result will be the same. The Senate Finance Committee has proposed a 100 percent excise tax on all costs involved in these transactions, and while this legislation has not yet passed into law, restrictive legislation in some form is almost certainly to be passed in the near future.

To gather information to better form this future legislation, the Pension Protection Act of 2006 imposed a two-year reporting requirement on all charities that have entered into arrangements where life insurance interests are in anyway split between the charity and private investors. Furthermore, the Treasury Department has been charged with assembling a report to Congress detailing whether these plans are suitable for a charity’s tax exempt purpose.”